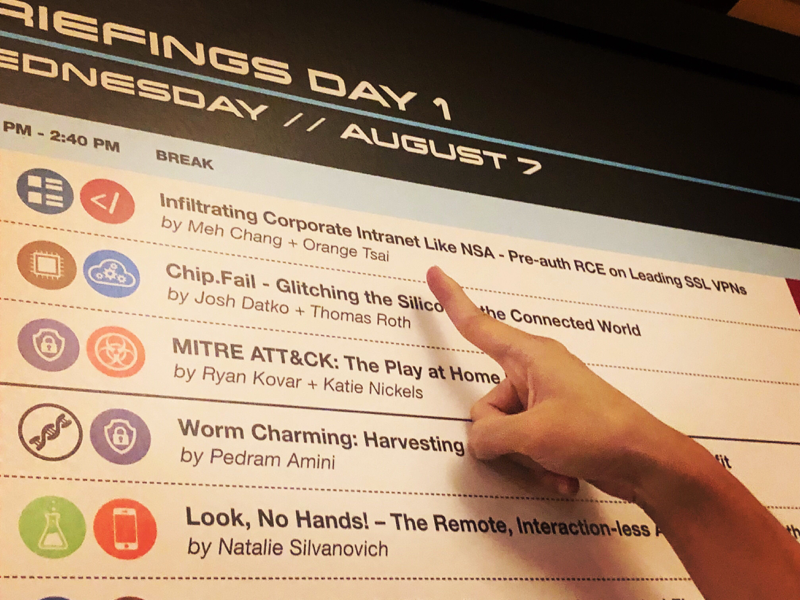 Last month, we talked about Palo Alto Networks GlobalProtect RCE as an appetizer. Today, here comes the main dish! If you cannot go to Black Hat or DEFCON for our talk, or you are interested in more details, here is the slides for you!

We will also give a speech at the following conferences, just come and find us!

The story began in last August, when we started a new research project on SSL VPN. Compare to the site-to-site VPN such as the IPSEC and PPTP, SSL VPN is more easy to use and compatible with any network environments. For its convenience, SSL VPN becomes the most popular remote access way for enterprise!

However, what if this trusted equipment is insecure? It is an important corporate asset but a blind spot of corporation. According to our survey on Fortune 500, the Top-3 SSL VPN vendors dominate about 75% market share. The diversity of SSL VPN is narrow. Therefore, once we find a critical vulnerability on the leading SSL VPN, the impact is huge. There is no way to stop us because SSL VPN must be exposed to the internet.

At the beginning of our research, we made a little survey on the CVE amount of leading SSL VPN vendors:

Fortinet calls their SSL VPN product line as Fortigate SSL VPN, which is prevalent among end users and medium-sized enterprise. There are more than 480k servers operating on the internet and is common in Asia and Europe. We can identify it from the URL /remote/login. Here is the technical feature of Fortigate:

While fetching corresponding language file, it builds the json file path with the parameter lang:

There is no protection, but a file extension appended automatically. It seems like we can only read json file. However, actually we can abuse the feature of snprintf. According to the man page, it writes at most size-1 into the output string. Therefore, we only need to make it exceed the buffer size and the .json will be stripped. Then we can read whatever we want.

There are several XSS:

While encoding HTML entities code, there are 2 stages. The server first calculate the required buffer length for encoded string. Then it encode into the buffer. In the calculation stage, for example, encode string for < is &#60; and this should occupies 5 bytes. If it encounter anything starts with &#, such as &#60;, it consider there is a token already encoded, and count its length directly. Like this:

However, there is an inconsistency between length calculation and encoding process. The encode part does not handle that much.

In the login page, we found a special parameter called magic. Once the parameter meets a hardcoded string, we can modify any user’s password.

According to our survey, there are still plenty of Fortigate SSL VPN lack of patch. Therefore, considering its severity, we will not disclose the magic string. However, this vulnerability has been reproduced by the researcher from CodeWhite. It is surely that other attackers will exploit this vulnerability soon! Please update your Fortigate ASAP!

Critical vulns in #FortiOS reversed & exploited by our colleagues @niph_ and @ramoliks - patch your #FortiOS asap and see the #bh2019 talk of @orange_8361 and @mehqq_ for details (tnx guys for the teaser that got us started) pic.twitter.com/TLLEbXKnJ4

This is a vulnerability on the WebVPN feature. While parsing JavaScript in the HTML, it tries to copy content into a buffer with the following code:

The buffer size is fixed to 0x2000, but the input string is unlimited. Therefore, here is a heap overflow. It is worth to note that this vulnerability can overflow Null byte, which is useful in our exploitation.
To trigger this overflow, we need to put our exploit on an HTTP server, and then ask the SSL VPN to proxy our exploit as a normal user.

The official advisory described no RCE risk at first. Actually, it was a misunderstanding. We will show you how to exploit from the user login interface without authentication.

Our first attempt is exploiting the pre-auth heap overflow. However, there is a fundamental defect of this vulnerability – It does not overflow Null bytes. In general, this is not a serious problem. The heap exploitation techniques nowadays should overcome this. However, we found it a disaster doing heap feng shui on Fortigate. There are several obstacles, making the heap unstable and hard to be controlled.

We were stuck here, and then we chose to try another way. If anyone exploits this successfully, please teach us!

This is a combination of pre-auth file reading and post-auth heap overflow. One for gaining authentication and one for getting a shell.