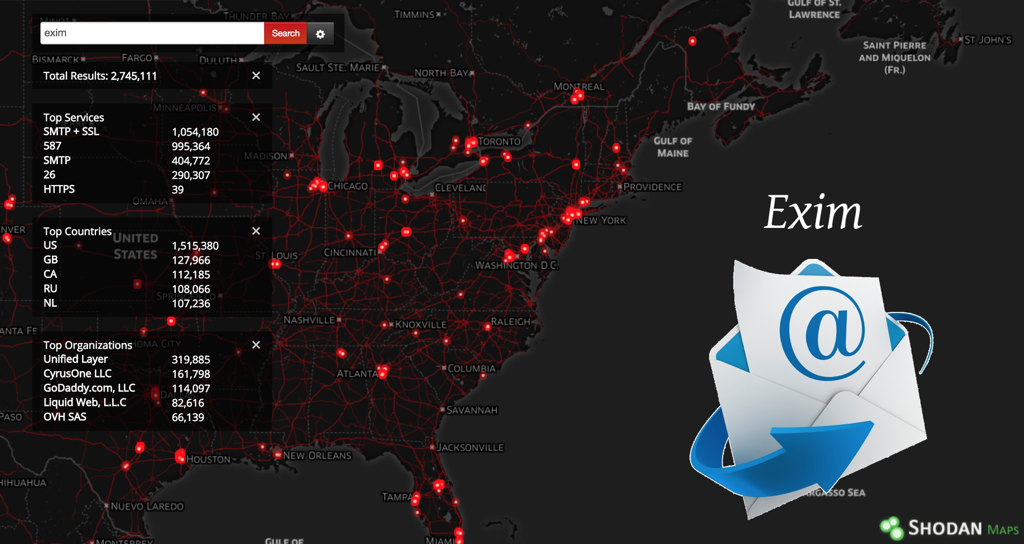 On 23 November, 2017, we reported two vulnerabilities to Exim. These bugs exist in the SMTP daemon and attackers do not need to be authenticated, including CVE-2017-16943 for a use-after-free (UAF) vulnerability, which leads to Remote Code Execution (RCE); and CVE-2017-16944 for a Denial-of-Service (DoS) vulnerability.

Exim is a message transfer agent (MTA) used on Unix systems. Exim is an open source project and is the default MTA on Debian GNU/Linux systems. According to our survey, there are about 600k SMTP servers running exim on 21st November, 2017 (data collected from scans.io). Also, a mail server survey by E-Soft Inc. shows over half of the mail servers identified are running exim.

Through our research, the following vulnerabilies were discovered in Exim. Both vulnerabilies involve in BDAT command. BDAT is an extension in SMTP protocol, which is used to transfer large and binary data. A BDAT command is like BDAT 1024 or BDAT 1024 LAST. With the SIZE and LAST declared, mail servers do not need to scan for the end dot anymore. This command was introduced to exim in version 4.88, and also brought some bugs.

Use-after-free in receive_msg leads to RCE

To explain this bug, we need to start with the memory management of exim. There is a series of functions starts with store_ such as store_get, store_release, store_reset. These functions are used to manage dynamically allocated memory and improve performance. Its architecture is like the illustration below:

Initially, exim allocates a big storeblock (default 0x2000) and then cut it into stores when store_get is called, using global pointers to record the size of unused memory and where to cut in next allocation. Once the current_block is insufficient, it allocates a new block and appends it to the end of the chain, which is a linked list, and then makes current_block point to it. Exim maintains three store_pool, that is, there are three chains like the illustration above and every global variables are actually arrays.
This vulnerability is in receive_msg where exim reads headers:
receive.c: 1817 receive_msg

It seems normal if the store functions are just like realloc, malloc and free. However, they are different and cannot be used in this way. When exim tries to extend store, the function store_extend checks whether the old store is the latest store allocated in current_block. It returns False immediately if the check is failed.
store.c: 276 store_extend

Once store_extend fails, exim tries to get a new store and release the old one. After we look into store_get and store_release, we found that store_get returns a store, but store_release releases a block if the store is at the head of it. That is to say, if next->text points to the start the current_block and store_get cuts store inside it for newtext, then store_release(next->text) frees next->text, which is equal to current_block, and leaves newtext and current_block pointing to a freed memory area. Any further usage of these pointers leads to a use-after-free vulnerability. To trigger this bug, we need to make exim call store_get after next->text is allocated. This was impossible until BDAT command was introduced into exim. BDAT makes store_get reachable and finally leads to an RCE.
Exim uses function pointers to switch between different input sources, such as receive_getc, receive_getbuf. When receiving BDAT data, receive_getc is set to bdat_getc in order to check left chunking data size and to handle following command of BDAT. In receive_msg, exim also uses receive_getc. It loops to read data, and stores data into next->text, extends if insufficient.
receive.c: 1817 receive_msg

In bdat_getc, once the SIZE is reached, it tries to read the next BDAT command and raises error message if the following command is incorrect.
smtp_in.c: 628 bdat_getc

In exim, it usually calls synprot_error to raise error message, which also logs at the same time.
smtp_in.c: 628 bdat_getc

The log messages are printed by string_printing. This function ensures a string is printable. For this reason, it extends the string to transfer characters if any unprintable character exists, such as '\n'->'\\n'. Therefore, it asks store_get for memory to store strings.
This store makes if (!store_extend(next->text, oldsize, header_size)) in receive_msg failed when next extension occurs and then triggers use-after-free.

The following is the Proof-of-Concept(PoC) python script of this vulnerability. This PoC controls the control flow of SMTP server and sets instruction pointer to 0xdeadbeef. For fuzzing issue, we did change the runtime configuration of exim. As a result, this PoC works only when dkim is enabled. We use it as an example because the situation is less complicated. The version with default configuration is also exploitable, and we will discuss it at the end of this section.

When dkim is disabled, the PoC above fails because current_block is the last chunk on heap. This makes the system merge it into a big chunk called top chunk rather than unsorted bin.
The illustrations below describe the difference of heap layout: 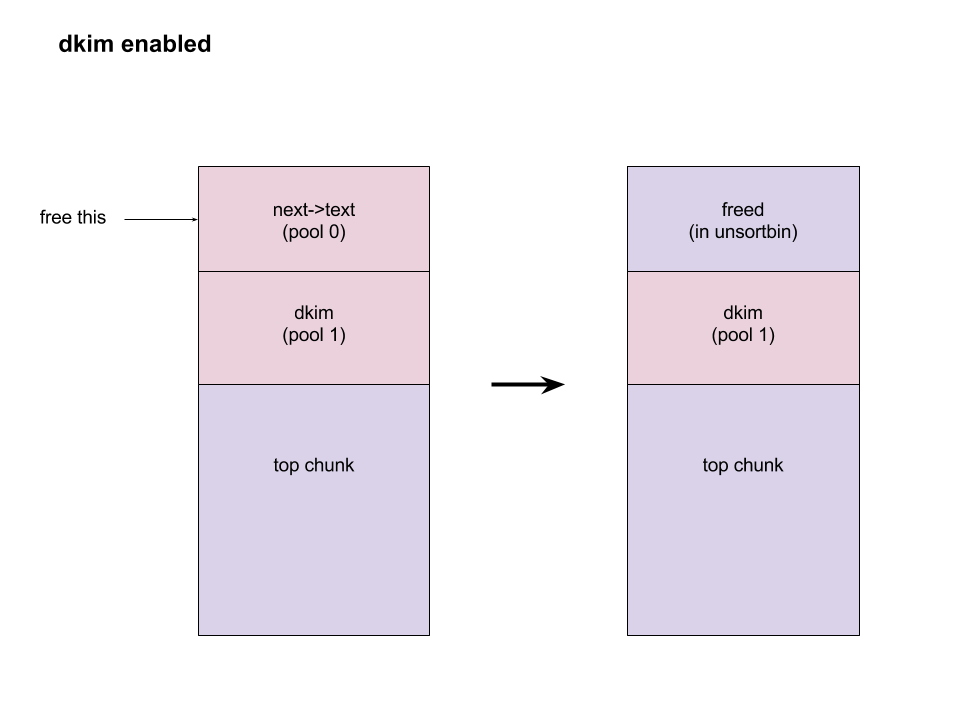 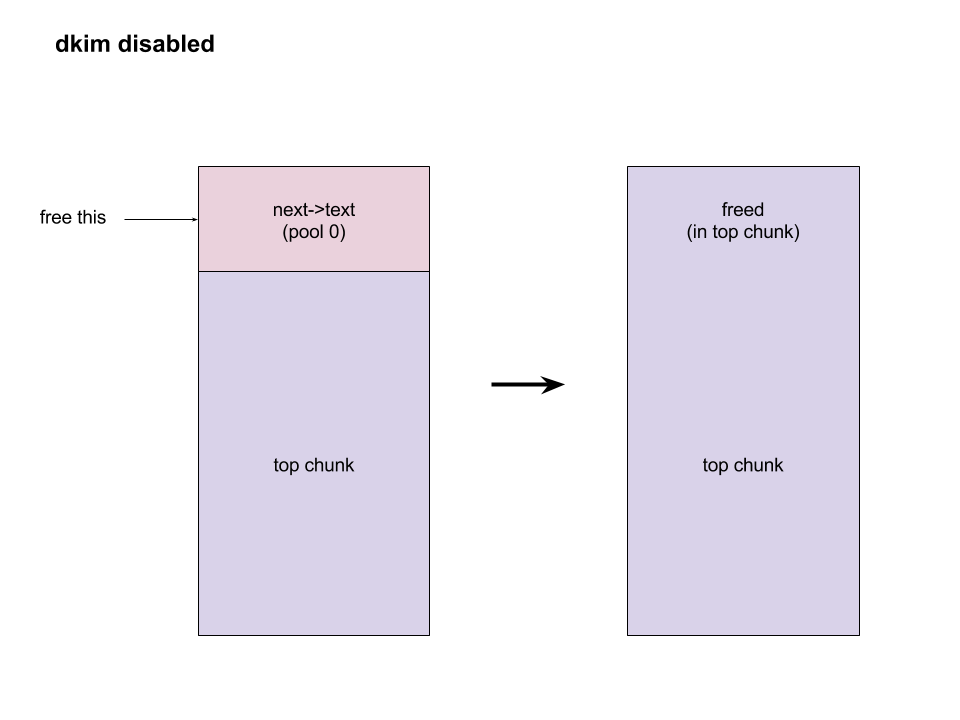 To avoid this, we need to make exim allocate and free some memories before we actually start our exploitation. Therefore, we add some steps between step 1 and step 2.

After running out of current_block: 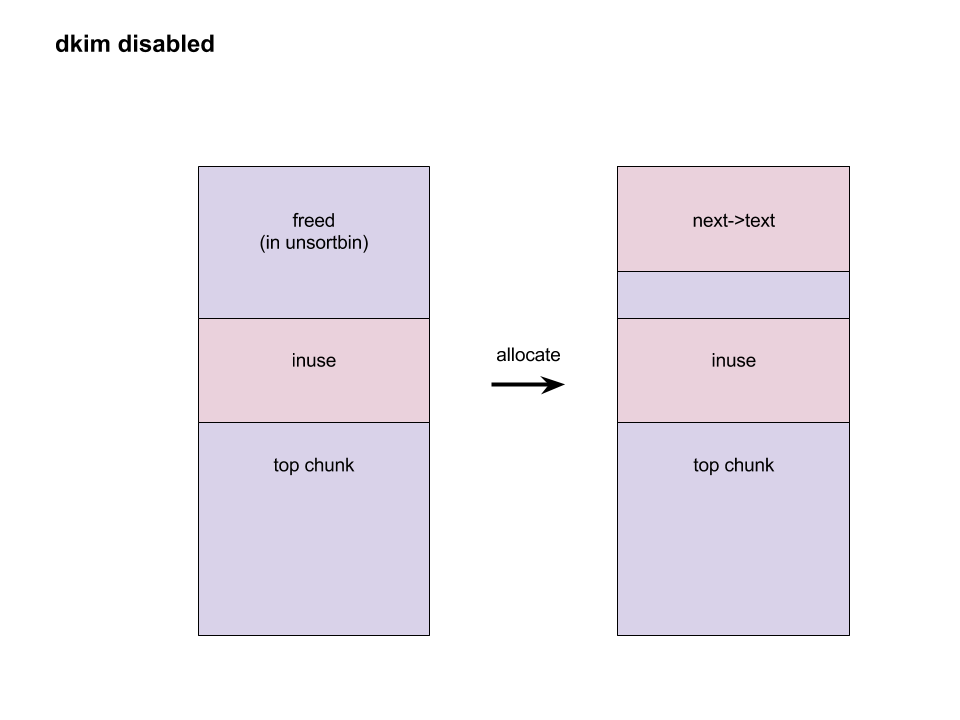 And now we can go back to the step 2 at the beginning and create the same situation. When next->text is freed, it goes back to unsorted bin and we are able to overwrite libc global variables again.
The following is the PoC for default configured exim:

A demo of our exploit is as below.

Note that we have not found a way to leak memory address and therefore we use heap spray instead. It requires another information leakage vulnerability to overcome the PIE mitigation on x86-64.

When receiving data with BDAT command, SMTP server should not consider a single dot ‘.’ in a line to be the end of message. However, we found exim does in receive_msg when parsing header. Like the following output:

As we mentioned before, exim uses function pointers to switch input source. This bug makes exim go into an incorrect state because the function pointer receive_getc is not reset. If the next command is also a BDAT, receive_getc and lwr_receive_getc become the same and an infinite loop occurs inside bdat_getc. Program crashes due to stack exhaustion.
smtp_in.c: 546 bdat_getc

This is not enough to pose a threat because exim runs a fork server. After a further analysis, we made exim go into an infinite loop without crashing, using the following commands.

This makes attackers able to launch a resource based DoS attack and then force the whole server down.

While we were trying to report these bugs to exim, we could not find any method for security report. Therefore, we followed the link on the official site for bug report and found the security option. Unexpectedly, the Bugzilla posts all bugs publicly and therefore the PoC was leaked. Exim team responded rapidly and improved their security report process by adding a notification for security reports in reaction to this.